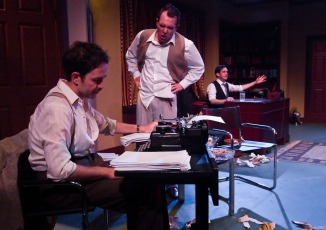 “Moonlight and Magnolias”:     It was supposed to be the epic film interpretation of Margaret Mitchell’s blockbuster “Gone with the Wind”. But, now, it’s all fallen in a heap. The producer – David O. Selznick has just stopped the shoot, sacked the director, and the script is in shreds….And there’s just five days before Selznick’s career goes the same way!

Locked in Selznick’s office with a new director and scriptwriter, can they resuscitate what remains of the story and their own careers in just few days? And, NO! you can’t have a bagel!